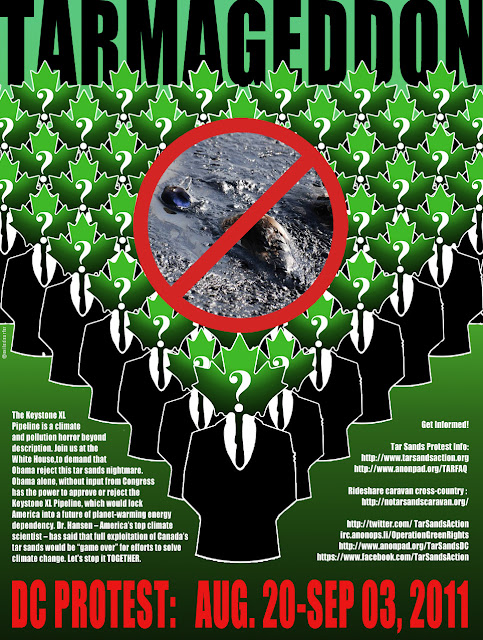 Citizens of the World:

Anonymous' Operation Green Rights would like to call to your attention an urgent situation in North America, perpetuated by the boundless greed of the usual suspects: Exxon Mobil, ConocoPhillips, Canadian Oil Sands Ltd., Imperial Oil, the Royal Bank of Scotland, The Canadian Association of Petroleum Producers, and many others.

The Tar Sands oil extraction industry is an environmental disaster.

Also known as the oil sands, Tar Sands are one of the largest remaining deposits of oil in the world. Efforts to extract the resource from a mix of clay and other materials underneath Canada’s Boreal forest have created the biggest, and by the accounts of numerous scientists and environmental groups, the most environmentally devastating energy project on Earth.

On August 20th through September 3rd, activists young and old are gathering in Washington D.C. for ten days of civil disobedience in protest of the tar sands oil industry, and to call out for safer and cleaner alternatives.

Anonymous now joins this international struggle for the rights of the world's citizens to a clean environment , and against all industries that threaten the future health of the world's living things.

We stand in solidarity with any citizen willing to peacefully risk arrest to call out corporate abuse. The people of Earth will not stand by idly and let these environmental atrocities continue.

This is not the clean energy of the future that we are being promised.

We will - over the course of the next few weeks - use the powers we posses to spread news about this protest to viral proportions, and to share damning information about the corporations involved.

We all must work together to expose the corruption that we all KNOW is beneath this.

Anonymous will provide air support and lulz as the activists in D.C. confront this dire issue on the streets. We urge you to get involved. Join the protest if you are close enough. Donate money to the organizations involved with the struggle. If you're not nearby enough to Washington D.C., join us in the IRC listed below to experiment in how we can spread word of this protest, and disobey civilly in our own ways.

The continued development of the tar sands is a major step backwards in the effort to curb the pollution and poisoning of our natural environment. Anonymous will not suffer this without a fight, and Operation Green Rights will always support the rights of the people to live in an unpolluted world and to safeguard it for the future one way or another.

We do not forgive.

We do not forget. 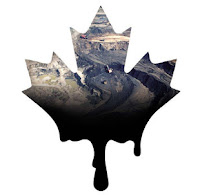