...the old story of the silent ethnic cleansing continues 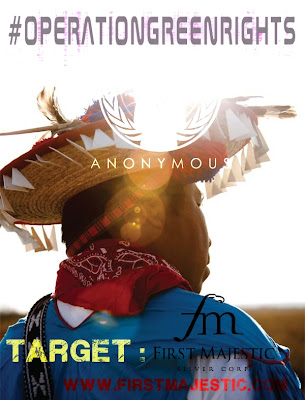 The government of Mexico wants to sell the Wicholls' lands in Real de Catorce to the First Majestic Silver mining company.
The lands are in Wiracuta cultural and ecological reserve. The aforementioned lands are also protected by the world network of sacred sites. Wirakuta is a sacred site s for whicholls, and they have pilgrimages to reach the site.In the area grows peyote and is a right of wicholls,by declaration of native people's rights,to conserve their culture and tradition.

No one inform Wicholls about the mining project and this also violates Wichols rights from the UNO's declaration about Indigenous peoples rights.
Also in Guatemala Ixil people are in danger for the Enel dam project and in Brazil Kayapo  have to leave their lands and their sacred river is devasted and polluted.

#OpMexico #OpChile #Peru #OpArgentina #Iberoamerica #Operationgreenrights stands up with whicholls and all native peoples of South America against the devastation of nature and the destruction their cultures.