Today begins the week of marketing energy, and sustaining profits for the biggest companies. 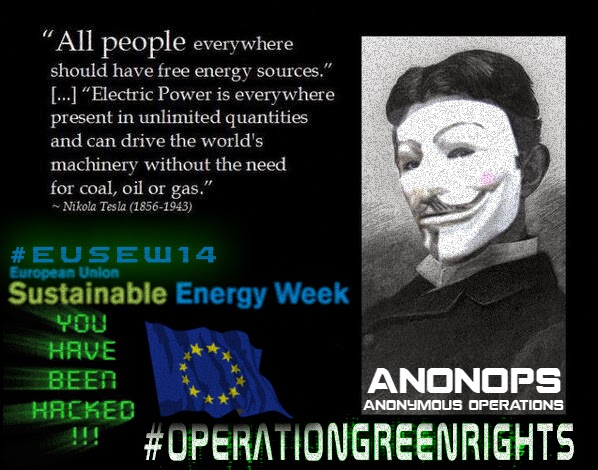 Worldbank,Bayer,ExxonMobil,Enel,Edf,GE,Shell,BP,Eni,Nokia,Intel...and many others.
operation initiative to encourage real #sustainable #energy

This operation aims to underline the hypocrisy and deceit of the financial powers in Europe. Today begins the week of marketing energy, and sustaining profits for the biggest companies. The event is organized by the European Union, however, the list of accounts that we have stolen from the database of "www.eusew.eu" indicates that high profile companies are also involved in the profitable destruction of ecosystems. Bayer, Dow , ENEL, EDF, GE, Shell, BP, ENI, Nokia, and Intel, to name only the most famous, as well as the involvement of the WWF and the World Bank. Now everyone can see for themselves what's truly being sustained for this event; simply download the published data and perform a search by name or industry with respect to each of the aforementioned companies; in each case you will find that there are many accounts of leaders of various levels corresponding to each of them. With this you can also highlight the involvement of more or less influential members of the ministries of the environment across Europe. The affected site is managed by the organizers of the Sustainable Energy Week, so the fact that a known unsustainable industry appears in the list given to us reveals that the event organizers hold regular contact with the industries .

We invite everyone to decrypt the passwords on the list of accounts and use it to merge the databases of governments and industries, making the most of your right to freedom of information. The website "www.eusew.eu" is nothing more than a deceptive facade built for the committee of the companies whose intent is to mar the natural landscape and the health of human beings in the name of pure profit. Evidently none of the parties involved have the moral dignity to be able to discuss the defense of ecosystems and sustainable energy which stolen top secret documents aren't needed to prove. The proof is all around you, and it is a subject of many infamous abuses.

To name a few: 1.) Bayer: up until a few years ago, Bayer was producing a large amount of insecticides which are used on crops, however these insecticides are a major cause in the dissapearance of bees worldwide. We must keep in mind that in the event pollinating insects like bees become extinct, agricultural industry and production would grind to a halt, and lead to a worldwide famine. Another tragedy induced by the Bayer company resulted from one of its medical products, known as "FACTOR 8", intended for use by Hemophiliacs. This product was found to be contaminated with HIV after its use resulted in millions of deaths. It was later revealed that Bayor had knowledge of this contamination. 2.) Dow chemical: We must include the destruction caused by the explosion of the Bopal plant in India, resulting in the spread of a toxic cloud affecting hundreds of thousands of people. 3.) ENEL: The case of the Mochovce nuclear power plant, revealed by a previous operation, the veracity of which was confirmed by Greenpeace, is a nuclear power plant built with cheap materials, according to the safety standards of the 1950s ( lack of double wall containment for the radioactive material), and taking advantage of unskilled workers. The incriminating documents that prove all of this was handled on behalf of ENEL. We must also mention a report that ENEL operates power generation facilities throughout Europe that often burn toxic materials, as in the case where the company had used Torrevaldaliga coal containing sulfur residues that fall to the ground as rain laden with sulfuric acid. 4.) EDF: Among its various activities we mention the numerous French nuclear power plants that are responsible for producing various kinds of cancers and radioactive emmissions that destroy the fish and fauna of the rivers. To ensure that uranium is needed for their operation, the French president Francois Hollande did not find any more fitting solutions than to invade a defenseless country in Africa and plunder the uranium-rich subsoil. 5.) GE: We keep the Fukushima nuclear disaster in mind when it was discovered that the plant technology was provided by General Electric. 6.) Shell: Remember that your mining activities in the Niger Delta have contaminated the natural land with oil, forcing fishermen into poverty and stealing from your oil drilling pipes to survive, risking their lives in the process. 7.) BP: We mention the disaster of April 2010 caused by the oil drilling platform "Deepwater Horizon" collapsing, and the subsequent pollution of the entire Gulf of Mexico, an area where the after-effects are still present, and a devastated marine ecosystem which has been impoverishing the once thriving fishing community and related businesses of the area as well as its fishermen. 8.) ENI was also implicated in the oil exploitation in the Niger Delta and then charged with the same atrocities committed by BP. We haven't forgotten an incident similar to that of the deepwater horizon tragedy in the Gulf of Mexico occurring at the offshore oil rig Perro Negro in the congo. 9.) The WWF is part of the roundtable for sustainable production of soy, and a similar roundtable for the sustainable production of palm oil. It boils down to business committees that bring together large multinational companies that profit from destroying nature with pesticides and GMOs. Together with these organizations, the WWF is committed to certify their falsely eco-sustainable food products. The purpose of these associations is to promote the perceived legitimacy of the GMO-producing corporations and their image along with coordinating investments to buy huge tracts of land for cultivation. It is often that forested areas are being destroyed along with the animals that lived in the areas in order to make way for GMO crops. This is the fate of most of the forest, along with the orangutans of the Borneo-outans. 10.) Nokia: As evidence provided by a UN investigation suggests, we know Nokia may have been involved in a war in the congo in the beginning years of the new millenium. In fact, regardless of the conditions and methods of extraction for coltan, at that time Nokia and other mobile phone and computer-producing companies greatly increased production of the mineral . This led to the first of an endless series of wars involving numerous armed groups in the looting of Congolese coltan miners extract from poor adhesive force alone of their arms. An inhuman work in contact for at least 12 hours a day with coltan, material proven to be radioactive. The death toll for the first Congolese civil war is an estimated one million victims.

With these few examples the ignominy of large multinational groups of arrogant parasites, contempt of man and nature with the help and complicity of the European Union will start today, a week of sustainable energy. The powerful industries and governments of Europe do not fool Anonymous and OperationGreenRights with this latest marketing scheme, under the colorful lights of the site www.eusew.eu The stained brand of your names, bloodied with ruthless exploitation, are all too transparent. Bayer, Dow, ENEL, EDF, GE, Shell, BP, ENI, Nokia, Intel have committed crimes against their fellow man and they have to answer in front of all humanity, so you have no moral authority to give lessons to the world on energy or environmental sustainability. It's obvious to everyone that your only interest is to get rich as possible without regard to environmental impact. You have no credibility when you claim to stimulate new forms of energy production alternatives to oil and uranium. Anonymous wants instead to refer to a scientist of brilliant intellect, who in his presence, with abject minds poisoned by profit, you usurpers of governments and industries hardly deserve to be called "human". That scientist's name is Nikola Tesla . We quote his own words: "everyone can have free energy resources. Electric power is everywhere present in unlimited quantities and can support the industrialized world without coal, oil or gas." And we would add "without uranium" to his list. In the name of this great mind and scientific soul, not subject to unclean profit, the criminal clique of state officials and their allied industries will meet their downfall. In conclusion, we speak for everyone when we demand that our people and environment must no longer be afflicted by your destructive chemicals and political subjugation.