[UPDATE 21/11/2013] Anonymous supports the protest against the construction of the Belo Monte Mega-Dam. 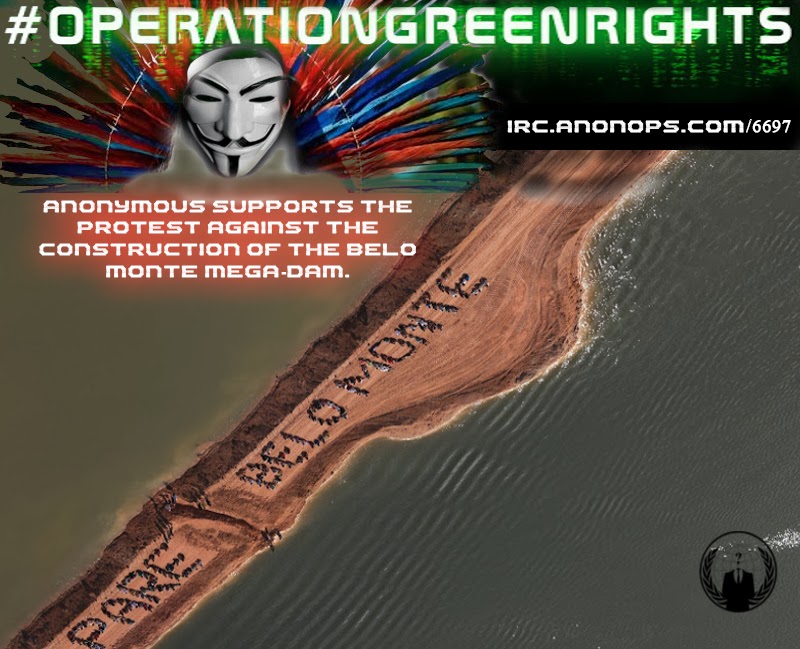 Anonymous supports the protest against the construction of the Belo Monte Mega-Dam.

Felicio Pontes, a Federal Public Prosecutor from the state of Pará, noted that 20 civil lawsuits have been filed since 2001 by his office (Ministério Público Federal) due to gross violations of human rights and environmental law in the licensing and construction of Belo Monte.
"The only reason construction of Belo Monte continues is that a legal artifice dating back to the military dictatorship, known as "Suspensão de Segurança" (security suspension) allows chief justices of federal courts in Brazil, upon request from the central government, to unilaterally suspend decisions on lawsuits against violations of human rights and environmental legislation, invoking supposed threats to the country's economic order".

The indigenous Brazilian Xingu people wich are ancient and peaceful are forced to leave their land without any compensation. There had been over 20 violations against the Xingu people. We underline that the rights of the Xingu people are enshrined by a declaration of UN (United Nation).
Hundreds of square meters of the Amazonia Rain forest will be flooded in order to build the dam.

With this action we want to support the Xingu people in their thrive for their rights. Xingu indigenous people's culture is a legacy for the whole of mankind.
No production of electricity justifies the destruction of the natural habitat of both people which have been living in harmony with the flora and fauna for thousands of years.

Deforestation in the Brazilian Amazon forest jumped to 28% in 2012 according to studies made by the Brazilian government.
Belo Monte dam's The construction of the dam go ahead due to special law of security that allows government to suspend civil rights in cases of emergency.

STOP deforestation in the Brazilian Rainforest and ethnic cleansing due to the mega dam!